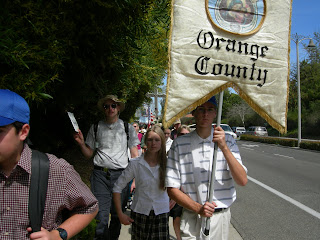 For hundreds of years, Catholics all over the world have made pilgrimages to holy places, especially during Lent. Here in Orange County we are continuing that tradition with a pilgrimage in honor of Our Lady and Blessed Junipero Serra. At 9 a.m., March 11, 2012 we will walk from St. Michael’s Abbey at 19292 El Toro Road in Silverado to San Juan Capistrano Mission Serra Chapel. The Pilgrimage will end with a Tridentine Latin Mass at Serra Chapel.
Posted by Laurence Gonzaga at 2/27/2012 No comments:

The Return of the Latin Mass to a Philippine School 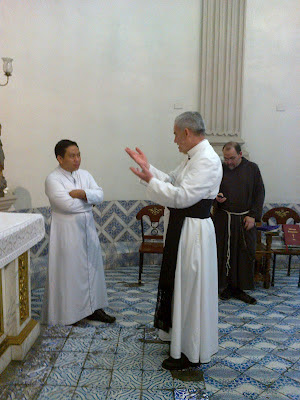 Last February 7, 2012, Rev. Canon Jean-Marie Moreau, ICRSS, a priest from The Institute of Christ the King Sovereign Priest, visited PAREF Southridge School, an all-boys private school located in Muntinlupa, Metro Manila,Philippines, and gave a talk to high school students and teachers on “The History and Development of the Roman Rite.” The talk was followed by a historic, first-ever celebration of the Holy Sacrifice of the Mass according to the Roman Missal of 1962 by Rev. Canon Moreau in the school chapel. The Missa Cantata was attended by the entire high school batch of around 300 hundred students, plus another 100 teachers and parents. The chaplain and the assistant chaplain assisted in choro.

The Missa Cantata marked the first time since 1965 that the 1962 Mass returned to a school in the Philippines attended by students and teachers. A special booklet missal was prepared by the school and handed out to the students before the Mass to enable them to understand and follow the ceremonies of the Mass. The overwhelming majority of students and teachers, some of whom were Opus Dei numeraries, had never before experienced the Traditional Latin Mass.

The Mass was very well received by the students and teachers. Many found it very solemn. One lady, who told me after the Mass that she goes to Mass at this chapel thrice a week but did not know that there was going to be this Mass, remained rooted in her place until well after the Mass and waited for Canon Moreau to come out of the sacristy to kiss his hand, saying that this was a most moving experience for her. The school director also observed that this was the first time he saw the high school boys behave so well and follow the Mass intently, even singing the ordinaries and responses together with the choir. The school thanked me for bringing the Mass and allowing all of them to experience the richness of the Tridentine liturgy. The school will be doing more TLMs this coming school year, this time celebrated by the school chaplain.

The school is an apostolate work of Opus Dei members and as such is not technically a religious school. However, the Catholic faith is taught rigorously in all grade levels and Masses (Novus Ordo) are celebrated reverently and according to the book. The school was very supportive of this initiative, even spending thousands of pesos to extend the sanctuary floor (covered in red carpet) to enable ad orientem celebration.

The school videotaped the entire Mass from the choir loft, but I’m still waiting for a copy. In the meantime, I’m sending you a video of the Mass taken by the father of one of the acolytes using his iPhone and iPad. Also attached here is the poster of the Mass. You can also click on the link to a slideshow made by Fr. Eric Forbes. It contains pictures of Canon Moreau in Guam and the Philippines, including two shots taken during his talk at Southridge.

Canon Moreau in Guam and the Philippines:

http://www.youtube.com/watch?v=niDjX3s0Wnc
Posted by Laurence Gonzaga at 2/25/2012 No comments:

Something Strange in the Wilmington Neighborhood

Over the years I have noticed some strange liturgical anomalies at various Latin Mass outfits in California. Most of them have been minor variations, and some have been serious aberrations which I have documented at Rorate Caeli, what could be called a hybrid Mass. But, this past week I had noticed a very strange thing going on at Sts. Peter and Paul in Wilmington. The people are being directed to go against the universally accepted norm of standing for the Pater Noster during the Missa Cantata and High Masses. The head server directs the people to kneel down during the Pater Noster. This is so counter-intuitive. One basic rule of thumb with the sung and solemn extraordinary form is you stand every time you hear the words "Per omnia saecula saeculorum" and "Dominus vobiscum". This just throws this rule of thumb out the window. He uses as his basis, a published set of "rubrics" for the people that he copied out of his Fr. Lassance Missal, presumably thinking it would give his argument some weight. He puts it in the red missals. But, why stop there? Why not go back further to the postures before 1954? Why not go all the way back to when nobody knelt during a Sunday Mass at all because kneeling, a sign of penitence, was not believed to be appropriate on a Sunday, a celebration of the Resurrection? The Mass in the Extraordinary Form is not a museum piece. It is not a dead liturgy, never to grow, never to change. But this change has always been organic, with prudence, and reason. The red booklets made popular by the Coalition Ecclesia Dei are right on this one, where it has its own problems elsewhere which will be documented in the future on this blog. But, I am not sure what can be done in Wilmington. I hope someone can organize a civil discussion there because the people are confused. Do they follow the red missals or do they follow the directives of the head server and the pre-1962 Fr. Lassance Missal?
Laurence G.
Posted by Laurence Gonzaga at 2/25/2012 No comments:

Email ThisBlogThis!Share to TwitterShare to FacebookShare to Pinterest
Labels: national

It is with great pleasure that I report the whereabouts of Fr. Shannon Collins, a Fathers of Mercy priest. He was once the vocations director of the community, and the chaplain for the Shrine of the Most Blessed Sacrament, built by Mother Angelica. He has produced many powerful media products for EWTN and St Joseph Communications. Many speculations have circulated since 2005 as to the whys and wheres of his present assignment. Well, I did some digging today and found him. I found an obscure website referencing a Latin Mass in Kentucky. I called the parish phone number. A priest answered and I spoke to him a few minutes. He confirmed that there is in fact a Latin Mass there on Sundays at noon. I asked about Fr. Collins, and he said that Fr. Collins is at the parish of St. Bernard in Covington, KY. I asked if the Extraordinary Form is offered at that parish, and he said yes. I found the parish website and found no indication of an EF at that parish.


In The End My Immaculate Heart Will Triumph
Posted by Laurence Gonzaga at 2/02/2012 No comments: